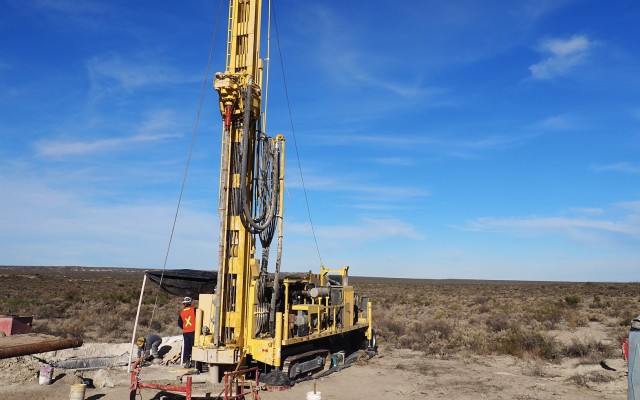 The reverse circulation program was designed to test the potential expansion of Ivana to the west as well as add holes in areas of lower density at the margins of the deposit to aid in resource upgrades.

It concluded with 350 holes drilled for a total 3255 metres to bring the total drilled at the immediate Ivana deposit area to 838 holes for 10,877m.

He said most of the high vanadium numbers encountered in the assays exceeded the average grade in Ivana’s current resource estimate.

Located in the Patagonia region of southern Argentina, Amarillo Grande is a new district-scale uranium discovery which houses the country’s largest inferred host resource of 22.7 million pounds of uranium and 11.5 million pounds of vanadium.

The project’s defined mineralisation is found at the Ivana, Anit and Santa Barbara target areas along a 145 kilometre trend.

It occurs at or very near the surface in unconsolidated to weakly-cemented host rocks, meaning that simple and inexpensive open pit mining could be a likely development scenario for Blue Sky.

The company is continuing to assess the potential of the Ivana North and Central target areas situated north of the main Ivana deposit.

An October campaign identifed anomalous low-grade (less than 100 parts per million) uranium intercepts returned in 30% of the holes completed at Ivana North.

Low-grade uranium can often be accompanied by anomalous pathfinder elements including molybdenum and selenium.

The results have been interpreted to confirm the potential for discovery of a redox (oxidation-reduction reaction) front related uranium mineralised system in the area.

Of the first six holes for 286m drilled at Ivana Central, 10 kilometres north of Ivana, two of them intersected anomalous uranium including 120ppm uranium oxide over 1m.

Approximately 1200m of the deposit’s initial program remains to be drilled to complete first stage exploration.

An additional 1500m of follow-up drilling has been planned to vector towards and define targets for new resources.

In 2016, Blue Sky launched an aggressive exploration program to delineate resources and outline economics across the project area in order to capitalise on an early-mover advantage.

The company aims to become the first domestic supplier of uranium oxide to Argentina’s nuclear industry and a potential international player.

A recent surge in global interest for vanadium has broadened Blue Sky’s potential target markets for material from Amarillo Grande.

According to the World Nuclear Association, over two-thirds of the world’s uranium production comes from mines in Kazakhstan, Canada and Australia.

Argentina is now stepping up to the plate as the largest consumer of nuclear power in Latin America.

The country currently has 7.5% of its energy generated from three reactors.

A fourth reactor to be built with Chinese support is currently in the planning stages.